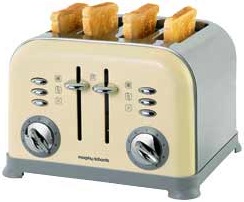 This morning, when I was making my Toast, I meditated on the controls:

I think we have a lot to learn from the humble toaster, namely:

To continue with the eject button, this gives us the capability to “inspect” our business in an #Agile manner. If you want to know what’s going on, eject your toast! Not well enough done (or non-light enough)? Simple, put it back in for more cooking.

That’s the benefit of having a toaster, a case study, a role model for what can be done. The fact that it’s been done before means that you can make your own toast! Totally customised by Lightness, Bagel and Ejecting.

And it also means that doing something that’s never been done before is even more valuable than you’d guess, because your peers and competitors probably never set the toaster controls the way you did!

With that, I’m off to have my Salmon Bagel…

So I’ve probably spent a bit too much time over the weekend looking at “Hitler Bunker Videos”. If you’re not familiar with them, there’s a classic scene from the movie Downfall, which strangely enough is about the last ten days of Hitler’s reign. There’s a huge community doing subtitles about various subjects over this scene (just Google). For my subject, I chose one close to my heart – SOA Architecture and Governance. Have a look, but it does have some swearing in it (which is pretty obligatory in HBV’s):

I suppose the other thing I should note is that my current contract is great and that the work I’m doing there is nothing like this or in that sort of environment. Also, I have tremendous respect for Thomas Erl and Gregor Hohpe, using material from them in much of my work. The video is more a compilation of the worst behaviors and attitudes that I’ve seen over the years I’ve been involved with SOA, Governance Committees and Senior Stakeholders ;-)

Finally, if you are interested in doing you’re own HBV, then the best starting point is this classic “Hitler and Friends Explain How to Make a Hitler Parody”

and that’s pretty much it! I did mine on a Mac and the instructions are pretty much the same but using iMovie. I put mine up on Vimeo as YouTube will give you a warning because they can match the clip to the movie and they’re pretty evil anyway. At one stage they did threaten to take down all the HBV’s. There is no problem with posting these though as something like this constitutes “fair use”.